Kaziranga National Park, situated in the northeastern state of Assam, is one of the most picturesque wildlife parks in India.

The natural habitat of the one-horned rhino (Rhinoceros unicornis), Kaziranga lies on the southern banks of the Brahmaputra River, northeast of Assam’s capital Guwahati. Originally established as a game reserve in 1908, which included specific portions of Assam’s Sibsagar district, Kaziranga was declared a sanctuary in 1940 to counter excessive poaching. In 1974, the Indian Government declared it as a protected site. 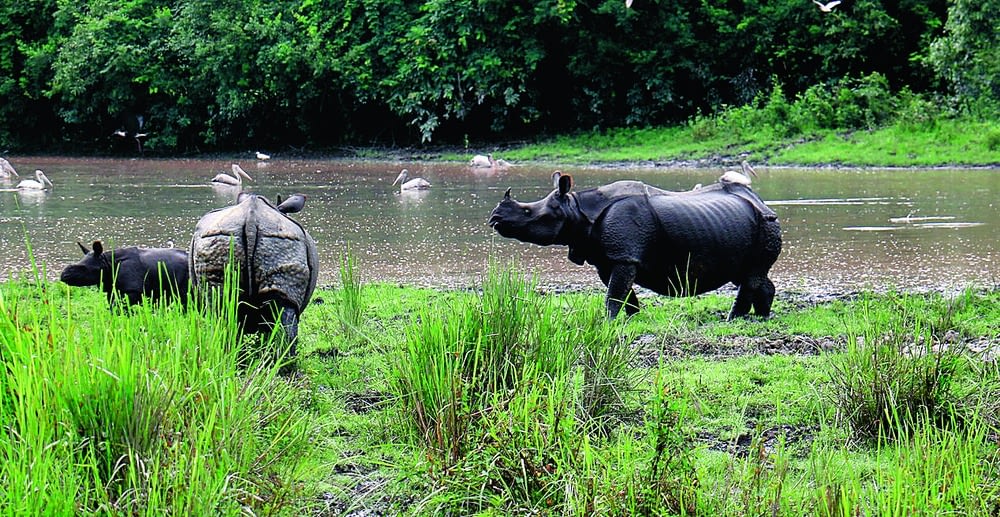 The park’s original inhabitants-the rhino and the elephant being the most noticeable-now thrive in a serene environment to the sheer delight of nature lovers.

Viewing wildlife at Kaziranga Park because of its vast open spaces, the presence of the mighty Brahmaputra, and adjoining Mikir hills makes a trip to Kaziranga a complete ‘jungle’ adventure.

Weather in Kaziranga is pleasant throughout the year. There are no extremities in terms of temperature variation; the winters (November-January) are cool and summers warm (temperature does not exceed 38°C). Monsoon (June-July) season is dominant and lasts for a long time in this area. Mild showers may be experienced throughout the year.

In November 1999, the Kaziranga National Park was selected for the millennium award by the World Wildlife Fund-Tiger Conservation Programme for being one of the best-managed parks in the country. The Park earned this award for the second time in succession.

The areas adjoining the park, though they sound like tough terrains, are easily accessible on the backs of elephants. Mihimukh is the starting point for the park and elephants can be hired from here to enter the sanctuary. An elephant-ride during early hours of dawn awards an excellent opportunity for seeing wildlife at a close range. Elephants are managed by authorized mahouts (trainers), who guide visitors through the park. Contrary to what one may have heard, rhinos browse past visitors nonchalantly. The rhino is a peace-loving animal and, instead of batting an eyelid about peaceful tourists who have invaded its territory, it keeps itself busy grazing in the wild. Moreover, the conditions at Kaziranga are ideal for the rhino to survive. In addition to elephant rides, several watch towers have been set up for elevated viewing of the wildlife park. Pleasant boat rides at the nearby Rhinoland park can also be availed by tourists.

Sunset is a pleasant sight as well with the birds returning to their nests. After sunset, a pleasant conversation and personal experiences can be exchanged with other fellow tourists once the day’s adventures come to a close.

Convention and norms are limited and the beauty of the regional flora and fauna can be enjoyed at its closest best. It is precisely for this reason that many tourists feel drawn towards Kaziranga National Park.

How To Reach Kaziranga

We provide all types of tourist cars for the city and intercity drives and can look after all your travel related services. Contact us to book now and pay later.